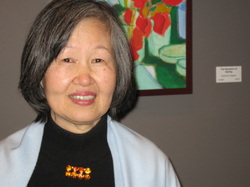 Noriko likes to paint everyday objects which not many people recognize.She finds them very interesting and gives them a life.

She studied art since Mita high school. Went Bunka Gakuin art school. She had many group shows and one man shows at the Mudo Gallery in Ginza, Tokyo.

She moved to New York in 1980 and later married.
Studied at the Art Student League and had group shows there.

Her paintings are collected by private and corporate in Japan and private in U.S.A.